The first (and last) jump on the course was this tiny little coop. When I walked the course, I thought, "Oh, a nice little inviting jump to start with." Then I realized the whole course was in kind. Hm... Well, now we know to push a little harder next time.

We came out of the start box, got our canter right away and popped over this like nothing. I always remind myself to ride the first fence so nothing untoward happens, but Cuna was totally nonplussed. 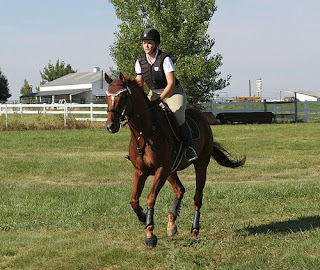 The second jump was the blue barrels. Cuna got a little crooked to them, but I insisted and he's way broke, so we hopped over and were off to the first gallop stretch. This was where we'd find out if I had anything close to enough brakes.

Answer: yes. We had this lovely little maintainable gait that let the spectators observe just how dashing Cuna looks in chocolate. He's rocking the black boots, but really folks. It can't go on.

The only bugaboo was that my course plan accounted for Cuna being super strong and me needing to swing wide and make a circle to get him back under control. He was super manageable, but I rode the wide line anyways. Because he is a MACHINE out there (and I was casual about giving direction), he just locked on to the novice jump we were cantering by. Ooops! I pulled him off it, and he gave a dramatic leap away as if to say, "Oh MY GAWD!!!! WHY did you almost let me JUMP that??"


He really didn't have to "come back" around the turn to fence three because he was already going so nicely. This is the jump that scared the crap out of me with Izzy and looked "rolex sized" when Cuna and I came and schooled here a month or so ago. Now? Yeah, not so much. Even with Cuna taking a tidy leap over the teeny fence, we were rather unimpressed. 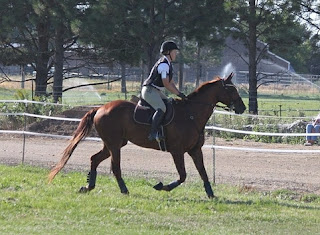 Jump 4 was the drop, which is really not that interesting to look at. The important part is that I didn't want to rocket off the drop, so my course plan involved bringing him back to a trot so we could place nicely off the bank.

That was also on my last course plan and trot was never achieved.

Here you go. Photographic evidence that Cuna in fact can trot on an XC course.


We had a swooping right hand turn after the drop to a ramp, one of the bigger jumps on the course. Let's be honest: it still didn't phase me and since it was after we'd already established a rhythm, I knew Cuna would take it in stride. This whole "trained horse" thing is amazing. Really. Y'all need to try it at least once.

Cuna skipped over it and we were on to the next field!


Jump six was the most solid thing on the course, a log pile. I made sure to ride like an XC jockey--sit in the tack about 3 strides out, keep leg and hand steady, stay a little behind. You can see I kept my heals down and upper body open. Cuna jumped like it was nothing.


Jumps 7 and 8 were in the far field. One was a coopy/rampy thing that was probably max height (a whole 2'7") and the other in that range, but a log pile. They barely even felt like speed bumps. We jumped the big log pile back into the main field and headed for jump 10.


We actually shared fence 10 with the intro BN riders, so it was a pathetically tiny double log that I almost brought Cuna back to a trot for just to be sure he actually saw it. It was also the jump that Izzy and I wrecked over. I can say any issue I had with that jump is officially over. Total non-event.

Fence 11 was actually the most challenging jump on the course. It was a long, steady downhill to a max height coop. There's nothing inherently difficult about jumping on a slight downhill, but I don't get to do it a lot. Thus, I knew the theory behind the ride, but have very little practice.

I half halted before the turn, kept my shoulders back, my feet a bit out in front, and my stirrup leather vertical. Cuna let me ride him positively to the base, and it was perfect.

It wasn't a difficult jump, but of the whole course, I am most happy with how I rode it. I made a plan, stuck to it, and things went great. 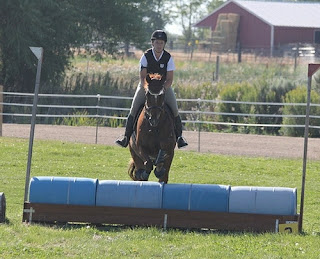 On to 12!! We now had to jump the blue barrels backwards. I wasn't concerned about the jump and my arms were actually still attached to my body (thank you giant bit), but my lungs felt like they were going to explode!! Yikes. Need to do some more conditioning on the human side. I sent Cuna to the jump and we cantered along and popped over. Seriously. It felt almost too casual. 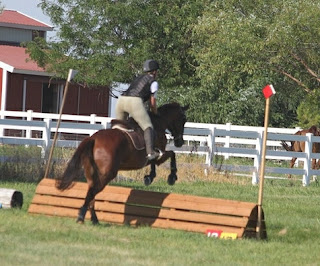 The last fence was just the first teeny coop jumped backwards. On my coursewalk, I decided the only potential problem at this point would be taking it for granted and forgetting to ride. As such, as we cantered in, I kept a strong kept with my leg ON and let him know I wanted to go OVER THE TEENY JUMP in no uncertain terms. He may have thought I was a bit over the top about it, but he popped right over and we hand galloped across the finish line.


I was thrilled with Cuna, thrilled with how I rode, and not that excited about the course. I mean, it was a perfectly acceptable for that level of course on decent footing. The questions were fair and the judges quite good.

It's just... the Old Man Horse has brought me so far even just in the last month that I found the whole thing a little underwhelming. I would never have believed in February when I first started riding him that he could take me this far in this short of a time, but the truth is that I was/am itching to try out the novice jumps. They looked more fun, maybe just the right amount of challenge.

In the back of my head, I was hearing Stephanie talk to me this spring when she said, "You are capable of jumping a 3' course and you're afraid of crossrails." It was when we were discussing selling Ms Izzy, but it's stuck with me. I know I'm not the be all and end all of riders, but I think I'm finally ready to move up.

So of course, I did the smartest thing possible. The following morning I texted Steph that I wanted to go faster and jump bigger jumps. We're now on the lesson schedule for tomorrow. Can't wait!!

Posted by SprinklerBandit at 4:28 PM